The following is the final position of a recent chess game I played: 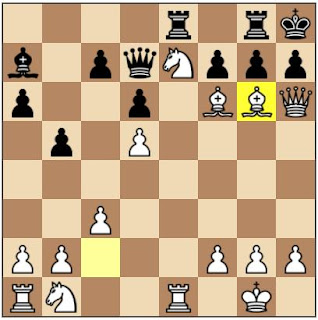 My queen and two bishops were all in front of my opponent's pawns and he couldn't capture any of them. A nice finish :P
Posted at 9:32 PM No comments: Links to this post


This is a cool video my coworker sent me :) The first one is here, not as good but pretty fun too!
Posted at 8:00 AM No comments: Links to this post

After seeing Tina Fey's hilarious imitation of Sarah Palin's interview with Katie Couric (the real one is here),

I admitted that it is, after all, not that difficult to choose the right president (as opposed in my previous post). Well, given a "not so smart" candidate and a regular candidate, who will you choose? Perhaps Palin's greatest contribution in this presidential election is to make it super easy for the US people to make an obvious choice :P
Posted at 12:57 AM 4 comments: Links to this post

Some thoughts on Democracy: Ethicality vs Effectiveness

Western cultures love democracy. You can tell that by the sheer number of US TV shows that involve voting:
And of course, we got to vote to decide who's going to be our president.

Why do we like democracy? One big reason is that it's fair. Thomas Jefferson wrote that "all men are created equal" in the Declaration of Independence. So, isn't it perfectly ethical that everyone should have his/her voice heard when it comes to deciding who's going to lead the country?

Yes, it's ethical, it's fair, it's politically very correct.

The sad thing is, ethicality doesn't necessarily lead to effectiveness.

"No, let me give you one counter example that fairness leads to effectiveness. The woman who won the Last Comic Standing was actually the funniest among all the other comics and she won because she got the most votes from the audience!"

Well, let me tell you: the reason we arrived at a good decision of the Last Comic Standing show was that people in general have the ability to decide, duh, who makes them laugh. It has nothing to do with whether the system is fair or not.

Now let me ask you

"The policies that Obama/McCain propose, do you think that they will be effective? If you do, why?"

I remember seeing a presidential debate between Obama and Clinton. The moderator asked Obama why he wanted to raise capital gain tax because, historically, raising tax rate doesn't necessarily increase tax income for the government. I forgot how Obama responded exactly but he implied that it is the right thing to do. Or, ethical, fair, politically correct, choose one you like. 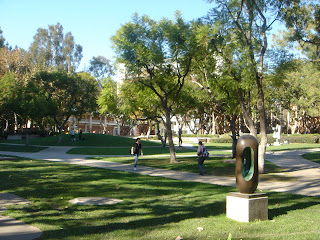 In Freakonomics, Levitt claimed that the sudden crime rate drop in the US during the 90's was due to the legalization of abortion in the 70's. I know there's a good deal of people who don't agree with his theory and I don't have time to read about all the technical details of their analysis. However, one thing I'm pretty sure is that Levitt's theory cannot be completely wrong.

If it's not completely wrong, we've just witnessed a case in which ethnically questionable behavior (abortion) can lead to good outcome for society (crime rate drop).

The more I read about economics, the more I believe that it's very difficult to decide whether a government policy is actually beneficial to the country. A policy that sounds so good to you may well be a disaster to the economy as a whole in the long run.

"We believe that everyone should get a job that pays living wage."

How can you make huge promises like these? How do you know that the polices you're proposing will actually work and not harm other parts of the economy at the same time? Do you know that we don't have infinite resources to make everything wonderful?

Maybe, maybe a citizen can decide whether your polices are good if s/he
Do you think an average citizen has/will do the above? Tell you what, I really like reading but I still feel tired if I need to read through a long article like this one to understand the cons of the abortion-drops-crime-rate theory. Mind you, it's just one theory/policy on one potential cause. A candidate proposes many policies that affect numerous aspects of the country. No exaggerating, one probably needs to read thousands of pages just to have a grasp of what really is going on.

That's why I think that, as good as democracy sounds, it is seriously handicapped in leading to effective decisions on complex issues such as, yup, choosing the right person as the president of a country.

If highly educated citizens in a developed country like the US may not make good decisions on choosing a good leader, how hot an idea can it be for a developing country like China with many illiterate citizens to practice democracy? I really, really doubt it.

What do I want to say in this post?
Thanks for reading :)
Posted at 10:41 PM 6 comments: Links to this post

原來只要共你活一天 (Just living with you for one day) - Jacky Cheung

Beautiful lyrics :)
Posted at 7:42 PM No comments: Links to this post

Bad decisons aren't that bad after all

Some days ago I shared Seth's post "The plight (and the pox) of the undecided". Now that I read about it again, I realize that there was a third reason in addition to laziness and keeping choices open for why people don't like planning:

They are just afraid of taking responsibility to make decisions.

Actually, it's not that difficult to sympathize with that fear in certain culture. In a regular Chinese elementary school, students are very much encouraged to follow orders. The teachers don't want the students to make decisions because they may very well be bad ones. Because of this, they'd rather make you follow orders, even though they're boring and can only lead to mediocre and expected behavior.

As scary as it may sound, bad decisions are often better than indecision/following order. Unless a bad decision is so bad that it leads to permanent damage (such as killing yourself or cutting off your legs), it usually is beneficial because it makes you learn something.

I think you didn't forget about Nietzsche's "That which does not kill us makes us stronger", did you?

What's so much a big deal of making a bad decision? Google screwed up the Google Chrome's privacy policy by including the wrong words in the terms of service and they quickly admitted the mistake and corrected it.

It puzzles me so much that when some company makes a big deal of it when its employees make bad decisions. In such a hostile environment, no one will take any chance and, consequently, no one will do an outstanding job either. Worse still, the employees will constantly need to be babysat by their managers and if the managers are out sick then everything comes to a halt since no one can/dare make a decision.

That reminds me of another quote:

"I have never made any mistake but I've also never accomplished anything."

How sad is that??

It's okay to make bad decisions, as long as you
So, be confident in making a decision next time (especially, yup, if you're a guy).
Posted at 12:21 AM No comments: Links to this post


This is the best MTV of Michael Jackson to my mind. I especially like the portion from 5:27 to 7:35; it feels so postmodernistic although the MTV was made in the 80's :)
Posted at 11:54 AM No comments: Links to this post

Free ice cream at Cold Stone on your birthday

Not sure if you guys know about this already but you can get a free ice cream at Cold Stone on your birthday: 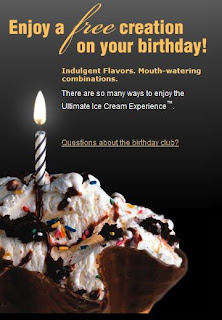 Image from Cold Stone Creamery
You can sign up here. I got mine this year and it was pretty good. Love their cheesecake flavor :)
Posted at 6:56 PM No comments: Links to this post 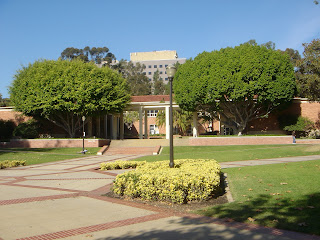 Yes it is, but it's true. Welcome to the business world of the U.S.
Posted at 8:00 PM No comments: Links to this post

It was hard to believe at first but then I believe it's true. I probably will buy a hamburger from McDonald's to try the experiment myself..

Posted at 8:00 AM No comments: Links to this post