"I don't believe in too hard"

In Bill Gates' video about malaria and education, he told people that he is "an optimist. Any tough problem, I think it can be solved". This made me think of Professor Randy Pausch's testimony to the members the Congress before he died:

In the testimony, he said

"I don't believe in too hard."

He believed that if enough funding is allocated for pancreatic cancer research, we should be able to raise the survival rate to a much higher one like breast cancer's.

True that there're probably some problems in this world that just cannot be solved. Despite that, I believe everyone should hold an attitude like Gates' and Randy's toward life.

Because of this, whenever I encounter a difficult problem, I usually say this to myself

"You think this is tough? There're many tougher problems in this world and some brave people are ruthlessly working on them. Don't be kidding me :P"
Posted at 11:29 PM No comments:

I don't get why very few of my Chinese friends like Mexican food. I guess that's because they can't stand the taste of the sauces? I really do love it though and one restaurant that I often get my Mexican food craving fixed is Baja Fresh. 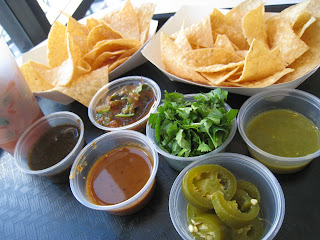 Among all the salsas that Baja Fresh provides, I love their tomato salsa the most (the one at the far left). 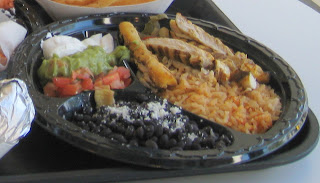 I also love the rice, black beans, guacamole and sour cream of their fajitas. Man, I'm drooling as I look at the pictures now... :P
Posted at 7:47 PM No comments:

Email ThisBlogThis!Share to TwitterShare to FacebookShare to Pinterest
Labels: Food

Give me an iPhone with no Internet

I'm not sure how big this market niche is but at least I'm in it: Give me an iPhone with no Internet.

It's a hassle for me to carry both my cell phone and iPod. So, I would like everything an iPod classic can do to be integrated with my cell phone. Yes, iPhone can do that, but it's also doing many other stuff that I don't need:In other words, I only need to talk and listen to music and audible books on my cell phone. Eliminate all the other fancy stuff and make the phone and carrier plans cheaper. The cost of the current iPhone is just still too much for what it's worth to me.

Does anyone else has the same needs like me? I hope that I'm not that weird.


A tricky baseball pitch by a Japanese guy. Does that break any rule in the real game? (o__O )
Posted at 10:14 PM No comments:

I'm sure you've heard about the mother who gave birth to an octoplet while she already has six kids. This kind of irresponsible childbearing is happening everyday, yet we've no solution to tackle it.

Why is it irresponsible?

The argument is straightforward: even if you're very rich that you don't have to work at all (which is not true for 99.99% of the world's population), you just won't have time to take care of all of them. Yeah, you can hire nannies to help you. But, what's the point? To have as many offspring that bear your genes? Why would you want to do that?

In most cases, the parents are far from being very rich and they don't even have enough money to give their children a barely acceptable environment to grow up in. What happens next? Welfare, money that have alternative uses to solve other societal problems, comes in and pay for the child expenses. Since the welfare money is limited, the kids aren't likely to get the care, nutrition and education they need. As a result, they became troubled teens and in the worst case turn into criminals and cause harm to other people.

Come to think about it, this is bad for the parents, bad for the children and bad for society.

We're talking about lose-lose-lose situation here, which is very bad (usually there's upside and downside for a decision, like raising tax). Let's think about what we can do to alleviate this problem.

Can we resort to something like the One Child Policy in China? No, the human rights activists in the U.S. will use all means to make sure that it won't happen.

"It is a very basic human right for a woman to bear children!"

"That is a violation of our freedom!"

Anyone can easily think of a dozen of emotional and persuasive slogans like that. Well, yeah, if we practice our rights and freedom responsibly, why would we need any policy like that, huh?

Basic economics tell us that when a cost induced by a person is shared by other people, one will likely abuse it as long as the reward is greater than the portion of the cost s/he bears. That's why factories tend to pollute air/water when there's no law that forbid them from doing it.

When a woman has kids that she's unable to raise, the cost (welfare) is shared by all the taxpayers. I'm not sure what the reward is in this case (the happiness of having kids?), but, similar to the factory case, people will tend to abuse the system when they know they've a golden parachute to take care of their kids.

Although I don't know about the statistics, let's be optimistic and assume that the people who abuse the welfare system are the minority. In that case, we can focus on the people who do not have the intention to bear child irresponsibly but do it because of ignorance. I can think of the following reasons for this group of people:
For the first case, the high schools in the U.S. are already providing some kind of sex education classes to the students. I don't know how effect those classes are but at least the government is doing something.

The second case is the one that the government isn't doing enough about. To solve this problem, high school students should be forced to take classes that teach them
Yeah, this is a very big topic to be written about and it takes a lot of research to figure out the best solution. Can some politician work on this issue?

If you're reading this, I hope is that you'll think ten times before deciding to have kids. It's a lifelong commitment and if you're not ready for it, you ruin both the lives of you and your kids, not to mention the damage you do to society.

Free curly fries at Jack in the Box on next Tuesday

Image from Hang in there Jack
Get some free curly fries at Jack in the Box next Tuesday! By the way, their Hang in there Jack website is pretty fun. We need more humor in this economy :P
Posted at 8:24 PM No comments:

How to be a responsible person: RSVP properly

Most of the ideas for the articles of my "How to be a responsible person" series come through my observation of people's common behavior. One thing that many people fail to do is to RSVP properly.

This actually surprises me quite a lot because it's so easy to do that it's completely unworthy to not do it and hurt your reliability and reputation.

Why RSVP in the first place?

Before talking about how easy it is, let's explore why the annoying host insists on receiving your reply to his/her invitation.

Let's say you are holding a wedding dinner. Usually, you would like to group people who know each other or share the same background in one table so they have common topics to talk about. In order to to do that, you need to know which of the invitees is coming first. If a guest who did not respond to your invitation suddenly shows up, you may have to seat him/her at a table with a bunch of strangers. This situation can be easily avoided if the guest responds to the invitation on time.

There are many other reasons why a host needs your RSVP. For example, if you are holding a birthday party at a decent restaurant that requires reservation, you need to know exactly how many of your friends are attending. If someone arrives unexpectedly, you may not even have a seat for him/her.

Not convinced yet? Alright, another example. You are holding a BBQ gathering at a park and you are the one who prepares the food. How much food should you prepare? Well, you need to know the headcount, at least approximately. If there are more people than expected, you don't have enough food to serve; if there are fewer people than expected, you may end up wasting food (and thus money).

So, if a host asks you to RSVP, don't question and assume that s/he has his/her reasons why s/he needs it.

Is it really easy to RSVP properly? Of course it is. Let me show you the steps on how that can be done:
Can you do the above? I bet you can.

Many online invitation (like evite and Facebook) service has a third option an invitee can choose beside "Yes" and "No": "Maybe". Honestly, I don't understand why those software engineers would create such an option because this "Maybe"
So, please do not choose that "Maybe" even though it's tempting. Just make up your decision and hit that "Yes" or "No" right away :)

Previous article: "How to be a responsible person: Use a calendar"
Posted at 10:37 PM No comments:

Nothing Gonna Change My Love For You - Kaori Kobayashi (小林香織)


Man, I was stunned after seeing Kaori's performance. I can't image that a cute girl like her can master saxophone so well. Maybe I've some kind of bias, I always think that saxophone is an instrument for black people since their lung volume is relatively bigger. Good job Kaori :)
Posted at 9:00 AM 2 comments: