Until the Last Moment - Yanni


My mom introduced me to many kinds of music, such as the new age music composed by Yanni. I especially love the soothing melody of the piano in the beginning of this piece :)

By the way, don't you think that Yanni really looks like Jesus? The image of Jesus in my mind is always like that, maybe due to the Christian story books I read when I was small.. :P
Posted at 12:21 AM No comments:

Friends whom you can bullshit with

"Nothing much, just talking to an idiot at this moment."

"Which idiot? Me?? You stupid asshole!"

"No moron let's do something fun."

"Chatting with a dunce is fun enough."

And the bullshit goes on and on between my friend and me. Usually it results in nothing meaningful. I enjoy it though, which conflicts with my result-oriented thinking a lot. Perhaps that's another side of me, I'm enthusiastic in retarded and meaningless things like Beavis & Butthead.

But, seriously, how many friends can you still bullshit with now?

To be honest, I haven't known any new "bullshit" friend for a loooonnnng time. And, in the foreseeable future, I don't expect to meet many of them, if not none. The "bullshit" friends I still have now? Countable with one hand.

Yeah, they are the only people who give me zero pressure. Only when they're around, I would dare be the ultimate Great Cornholio.

Afterthoughts: I'm so glad and kind of amazed to see that some people would spend so much time to write a lengthy and detailed Wikipedia article about the Great Cornholio; after all, there're still people who like retarded things like me :)
Posted at 3:29 PM No comments:

Thank you The Light!

I would like to thank everyone from The Light (Lily, Cindy, Eric, Thomas, Ernest, Tim and Bonnie) for celebrating Katie's birthday tonight. It really surprised Katie and me :)

Special thanks to Bonnie for making a very delicious Bailey cheesecake! 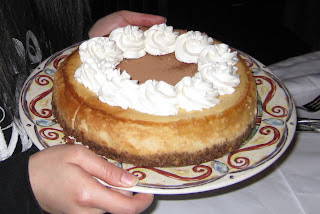 Email ThisBlogThis!Share to TwitterShare to FacebookShare to Pinterest
Labels: Announcement


I first heard this song when my high school friend played the computer game of the novel Legend of the Galactic Heroes (銀河英雄傳說) and since then whenever I listened to this song I'll think of the novel. There's another version from Pink Martini which I love very much too. It's a pity that I've not read the novel yet.. (~__~ )
Posted at 11:14 PM No comments:

Start to feel that my blog is a coupon/good deal site... But anyways, you can get free breakfast at Jamba Juice tomorrow (4/8/2008) until 10 am: 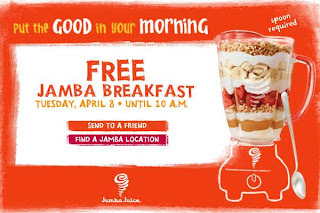 image from ExactTarget
Not all stores are participating though. Check this page for more details :o)
Posted at 1:20 PM No comments:

Get 4 free movie tickets by using your American Express card

Just found this on my friend's Xanga blog:

If you have an American Express card, just use it 2 to 3 times at certain store or restaurant between 4/1/08 and 5/31/08 and you can mail the redemption form to American Express to get 4 free movie tickets. I think the best deal is to buy three regular tacos at Del Taco since it's the cheapest. The claim form for Del Taco is here.

Actually, you can get 4 free tickets to a museum too, but the website doesn't say what museum is participating... :P
Posted at 11:57 AM No comments: