You should have heard of Google Maps' Street View feature before. Here's a new "Apartment" View feature :P
Posted at 10:00 PM No comments:

Just read the news about the death of Bobby Fischer, the only World Chess Champion from the US and was said to be the greatest chess player of all time. It's a pity that he didn't really play competitively in his last 30 years or so as I believe that he would have created a lot more great games.

To remember his greatness, the following was an ingenious play by him when he played against Donald Byrne in 1956 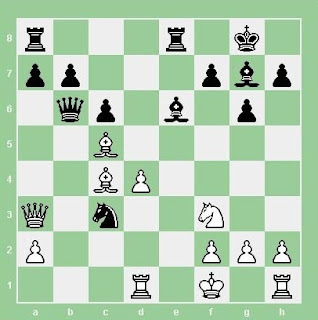 photo from chessgames.com
In the above, Fischer's queen was being attacked by the white bishop at c5. Instead of moving his queen away, he sacrificed it by moving his bishop to e6! In exchange of the queen, he gained massive attack opportunities with his minor pieces and finally won the game.

For those of you who don't know how to play chess, the queen is the most powerful pieces from your army and it's a big decision when you choose to sacrifice it. Despite this, Bobby Fischer had the insight to foresee that the sacrifice was worth it. (If you're interested in the complete game record, you can see it here)


Another good old song. Love the cute animation of this video :)
Posted at 10:50 AM No comments:

When Steve Jobs commented on the Amazon Kindle, he said

I was in doubt. After googling for a while, I found that it probably is true:
If 40% of the people read one book or less, it means that 60% of the people don't read at all. I love reading because it's a great way to learn new stuff and gain new perspectives. It's just kind of surprising to me that I actually belong to the weird group :P

Flash used in the right way

Although I generally hate it when websites use Flash, Etsy uses it creatively to let you find the products with the color your like. You can even throw the items you don't like outside of the color grid! Nice job :)
Posted at 1:32 PM No comments:

I always wonder why there's not a PC version of iMac. The idea of putting everything in the "monitor" is just great: it saves space and make your computer looks simple and elegant. I even thought that Apple somehow patented the idea so that other computer manufacturers can't copy it.

And today I saw the ad of Dell XPS One and love its look! (I know it was out like two months ago already, so pardon my slowness) 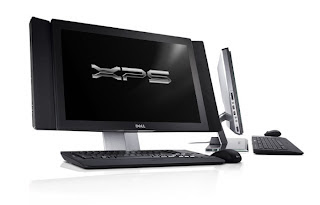 photo from dell.com
When my old desktop retires, I probably will go get one :)
Posted at 9:39 PM 2 comments:

Email ThisBlogThis!Share to TwitterShare to FacebookShare to Pinterest
Labels: Tech

From time to time I hear about people saying that old friends are more genuine so you should cherish the friends you have been known for long. I do love my old friends and feel blessed that I can still keep in touch with them after so many years.

Recently, a simple idea came to me and it helps explain why you feel that old friends are more genuine: not because they're more genuine people but that you're also treating them genuinely.

In other words, your genuineness brings up their genuine side. When you try to protect yourself by building a shell around yourself, people around you can feel it and thus they'll act the same way.

So, next time you say that some people aren't that friendly or phony, ask yourself: are you being unfriendly or phony to them too? I bet you're and if you care, someone will have take the first step by opening him/herself up :)
Posted at 10:16 PM 2 comments:

A stand-up comedy by Vivek Mahbubani

Saw this stand-up comedy on Justin's blog and want to share with you guys :) If you don't understand Cantonese there's a English version which is also very funny hehe

In an old post I once mentioned that I will play the piano version of La La La Love Song and post it on YouTube. On the last day of 2007, I finally did it. (just to make me feel that I did something meaningful in 2007 :P) Here it is, hope you like it :)