My girlfriend and I were pretty busy buying Christmas gifts these days. We actually went to the mall many times because we didn't expect that some people would give us Christmas gifts so we had to buy them gifts in return. After all, it's pretty embarrassing just to receive gifts from others.

We actually had a hard time figuring out what to buy for our friends. There're certain merchandise that are not good gifts such as clothes, pants, shoes, etc. They're just too personal. Some stuff are pretty practical, like toilet paper, detergent, milk, etc. But they're commodities, weird to give those as gifts. Besides, since we're not that rich, we've to limit our budget. And the gifts better be approximately equal in values: it's pretty embarrassing for a so-so friend to find out you give an iPod to your good buddy while he only gets a $10 Starbucks gift card.

At the end, we just bought a bunch of gift cards from some popular retailers. This actually serves all our three concerns:
As a matter of fact, I think it'll be most efficient just to give cash out, since they really can use them to buy anything they want without being limited to certain stores. It's just like Chinese adults giving children red pockets with cash inside during Chinese New Year. But it's so awkward giving out cash as gifts. Do you know any person who gives cash out? I don't personally know any, so I better follow the crowd :P 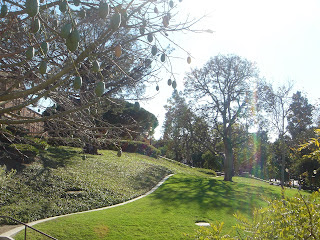 And I think to myself: why do we want to give gifts to others? I'm sure people have different reasons for doing this: thank the people who have helped them, show some people that they care about them, bribe the people who can help them in the future. Or they just send gifts out because it's Christmas and everybody is doing that. I don't know, but I think there's one simple thing we want to see: people feel happy after receiving the gifts.

To feel happy after receiving the gift, I think you've to like the gift that you receive. You'd say that the thoughtfulness of the person who gives the gift deserves appreciation also. Yup, I agree about that. This applies if the person giving the gift is not doing so because of tradition or the hope of getting something in return, which is probably 80% of the cases I'd say? If your case is one of those 80% I just mentioned, you probably want to make sure that the people whom you send gifts to actually like the gift you send, otherwise it's just a waste of your time and money and the gift receiver's time. (since s/he has to think about where to put or get rid of your "gift")

But how do we know what gift people like? That's the tough part. Sometimes I don't even know what gifts I'd like to receive, let alone the ones others would like to have. People in developed countries are blessed. If you're talking about basic necessities, people have them already. The stuff that people don't have are usually luxurious, like a S55 Mercedes or, hmmm, a house. (For those who don't live in LA, a house is pretty luxurious here) I don't know any friend who's rich enough to give these stuff as gifts. (if you know any introduce to me man!) So, you've a budget and you've to buy something people like/don't have. For me, figuring this out is more difficult than figuring Math puzzle like this.

To avoid hassles like this, I really think we should stop giving gifts because of tradition. Don't give gifts to people whom you don't really know. This just forces them to spend their time to think about what gifts to give you so that they don't feel that they owe you something. "Well, you mentioned about gift card right?" Yeah, but if we all give gift cards to each other, that is, exchanging them, isn't that sort of similar to exchanging cash? That's silly man.

If you buy your best friend a gift, he knows that he's not obligated to buy you something in return. You feel happy just by knowing that he really likes your gift, not by getting something back. And if you really give gifts to others for the purpose of getting something in return, hmmm, I think that's okay, since you already assume that those people know what you want, correct? Otherwise, you'd have to tell them "Hey I give you this gift so you better give me that in return." I don't think anyone would do that :P
Posted at 10:38 AM